It's been over a year since I ditched Chef for Ansible as my config management tool of choice. Now I am really interested in Docker. Docker provides a simple abstraction for working with containers, but working with docker involves running a lot of commands manually. Maybe ansible can help us automate working with docker.

In this post, I will show you three different ways to build docker containers with ansible. We will see some of the tradeoffs involved with each approach and discover whether or not ansible is a good tool for building docker images.

If you want to follow along, you should clone the example repo and use the provided vagrant box. You also need to have the latest version of ansible installed. I am using ansible 1.9.1 and docker 1.6.2 in this post.

I do not recommend using docker machine because it uses boot2docker, which does not come with python installed. Ansible requires a working python installation on the managed hosts. It is typically safe to assume that a linux distro comes with python, but it is now popular to run minimalistic distros for the docker host.

We are going to use three different techniques to build a docker container for a static site. The build process involves installing nginx, replacing the nginx configuration file with our own, and copying the index.html file to the appropriate directory. When running, the site looks like this. 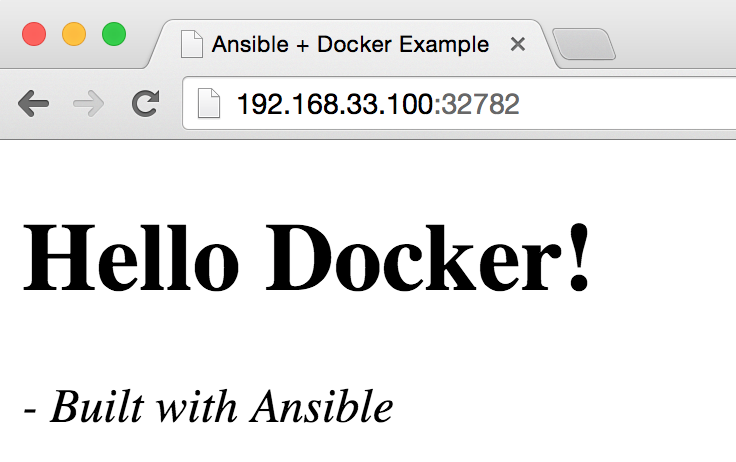 Building with the docker_image module (deprecated)

My first instict is to use the docker_image module since ansible includes it. The module docs contain a deprecation warning, but I want to try it anyways.

Let's start by uploading the site directory to the docker host. This is the first task in example1.yml.

This directory contains my nginx configuration, an index.html file, and a Dockerfile describing how to build the image.

With the site directory on the docker host, we can use the docker_image module to build it.

We can use the docker module, which is fully supported by ansible, to run a container from the new image, built-by-ansible:ex1.

We name the running container site1 and use the publish_all_ports option to make any exposed container ports (port 80 for our site container) available via a random host port.

Using the docker ps command, we can see which host port docker chose.

We could try to work around this by rebuilding the image whenever the synchronize module indicates a change. All we need to do is register the result of the sync task by adding register: sync_result, then conditionally run the build task by adding when: sync_result.changed.

Now our image gets rebuilt when we change site files, but the build task gets skipped entirely if we change nothing. If we change the image name or tag but not the site files, our image will not be rebuilt. That's not what we want!

One final reason not to use the docker_image module, besides being deprecated, is that it does not support communicating with docker over https.

Building with the command module

At this point, I've hopefully convinced you not to use the docker_image module. It may be better to run the docker build command directly. Typically you want to use an ansible module whenever one is available because modules are idempotent. Modules will only run if the actual and desired states are different. However, the docker build command has it's own built-in caching mechanism to help speed up subsequent builds by only rebuilding image layers that require a change, so using an idempotent module is redundant.

Let's replace the docker_image module with the command module.

That's it. We lose idempotency, but we ensure that are image is always built correctly. Time to run example2.yml

Again, you can use vagrant ssh -c 'docker ps' to find the host port for the container and view it in your browser. Notice that we've tagged this image :ex2 and named the container site2.

Another option available to you when using the command module is that it allows you to run your tasks locally and communicate with a remote docker host over https. For example, if you install docker machine, you can skip the synchronize task and run the tasks on localhost.

To get the docker module to work with docker machine, I had to use use_tls: encrypt instead of use_tls: verify (verify is more secure). I plan to revisit the docker module soon to understand why I had to do that and if there is a way to use verify. If you know why, please let me know in the comments.

To run this playbook, you will need to make sure you can communicate with your docker machine. I'm using the dev machine created during the default installation.

This sets up some environment variables to tell your local docker client how to communicate with the remote docker host. Once that's done, you can run example2b.yml.

That's it for docker machine today. The rest of the playbooks in this post will be run on our vagrant box.

Running a playbook inside a container

So far, our approach involves invoking docker's build system from ansible. The Dockerfile approach is simple and works well, but it lacks a many of the features ansible provides. And if you already have ansible roles and playbooks for building your app, you might prefer to skip the process of translating those into dockerfiles.

Ansible provides a docker image with ansible already installed, so let's try it. The example provided by ansible still involves the use of a dockerfile. This may be a good idea, but for now I don't want to use a dockerfile at all. To accomplish this requires a 2-step build process.

I'm using the set_fact module and with a lookup to create the temp_container_name fact. I can now use this fact in later tasks. I originally tried to create this as a variable, not as a fact, but surprisingly ansible would re-evaluate the lookup at the time of each task, so the timestamp changed from task to task.

Next I run ansible in a docker container.

Here are the contents of playbook.yml. We run this playbook inside the docker container to build our site. There is nothing special about this playbook, but it's important that we run it for localhost with a local connection.

If the task fails, we can use docker ps -a to find our container for troubleshooting. Assuming the task succeeds, we can create an image from our container.

At this point we've successfully built our image, but to keep things tidy, let's delete the container we used for running ansible. We don't need this container anymore because we will start a new one based on our image instead.

Now we are ready to run example3.yml.

This example is more complex than building with a dockerfile. However, it may be worth it if your application has a unique and complicated setup process and you already have the ansible roles and playbooks written. I suspect that as it becomes more common to run apps in containers, we will see fewer special snowflake applications and more apps standardize around common stack-specific base images.

There are a couple of drawbacks to this approach (besides the additional complexity).

Despite building the exact same site, the dependencies required to run ansible in a container doubles the image size. You can see below that :ex3 is 482 MB while :ex1 and :ex2 are only 206 MB.

Also, we build the entire image from scratch on every build, which is not very efficient. We can improve by checking for an existing image and running ansible in a container started from that image instead. Here are the changes we need to make:

We first run a shell command, which registers the image_check fact. Then we can check the result code to select our base image. Finally, we start our container with either the ansible/ubuntu14.04-ansible:latest or built-by-ansible:ex3 depending on the existence of the latter image. This way the first will still be slow, but later builds will be much faster because most tasks won't need to change anything.

Running [example3b.yml] with the -v (verbose) option, ansible-playbook -v -i hosts example3b.yml, shows that no modules detected changes on the second and later runs.

While this is a great speedup, it creates an extra layer each time you rebuild the image. This is problematic because an image can only have a maximum of 127 layers. You can use docker history built-by-ansible:ex3 to view the layers that compose our image.

Should you use ansible to build your containers?

Now that we've seen three different ways to build docker containers with ansible, which one should we use? If you ask Michael DeHaan, the creator of Ansible, probably none of them, this may be a job better left to your CI (continuous integration) server.

Containers typically have a single responsibility - a single app to run. This means that there is much less configuration required to build a container for an app than to build a virtual machine image for an app. Tasks such as like log management, process scheduling, and firewall rules are the responsibility of the host machine or the container runtime platform, not the container itself. This simplifies things a lot for the application developer.

In light of point #1, ansible adds an additional layer of complexity over cd some_dir && docker build ... that may have more costs than gains. Adding a docker build to your CI pipeline may be the path of least resistance.

Can you still use ansible and docker together?

Ansible is still great for gluing all of the disparate pieces of a system together. You can still use ansible to provision your docker hosts and set up dokku or mesosphere (depending on your scale and style). But if you're just using ansible to build docker images, it may be overkill.